This page is sponsored by

The creation of a country and the nurturing of a nation is always a fraught & fascinating affair. England is no different ~ its history is full of dramatic deeds & dreadful dangers; heroic highs & languid lows

England takes its name from the Angles ~ i.e. “the land of the angles”: possibly called “Angleland” in previous times, now known as England. The Angles were people from northern Europe who settled north of the River Thames and in particular along the River Trent, to form the kingdom of Mercia (sometime after 527)

The story of England and the English begins with the birth of King Athelstan (circa 894) and the Battle of Brunanburh (937). It ends with the death of Queen Elizabeth I (1603)

[ England’s timeline 894 – 1603 _ includes reference to King Canute & the North Sea Empire, William the Conqueror & Norman rule, Richard the Lionheart & the Crusades, Edward I & the conquest of Wales, the Hundred Years’ War, War of the Roses, Henry VIII & the Church of England, and Queen Elizabeth I & the Spanish armada ]

A BRIEF JOURNEY THROUGH TIME

Our brief journey through time takes us to a time after the Romans departed from this island (circa 410). Other tribes from mainland Europe began to settle here ~ these tribes included Angles, Saxons, Jutes and Frisians. These tribes generally remained independent of each other and over the following 300 years formed various kingdoms which we now call the Anglo-saxon heptarchy. The heptarchy consisted of 7 separate kingdoms ~ i.e. Northumbria, Mercia, East Anglia, Wessex, Essex, Sussex and Kent. The Angles formed the kingdom of Mercia sometime after 527

England’s story really begins with Athelstan, the grandson of Alfred the Great. Athelstan became England’s first king, following on from his coronation at Kingston-upon-Thames in 925. Athelstan (aged 30) was crowned king of the kingdoms of Wessex and Mercia and within 2 years he had united the kingdoms of Mercia and Wessex with the other kingdoms of the Anglo-saxon heptarchy to form one united country, which we now call England

[ DID YOU KNOW – It could be argued that King Egbert of Wessex was, in fact, the first king of England as he was the overlord of all the English kingdoms for a brief period of time (829 – 830) ]

Athelstan’s greatest moment of triumph was his victory at the Battle of Brunanburh in 937. Historians maintain this victory (against a mighty invasion force of Scots, Irish, Strathclydians and Scandinavians) was the catalyst that transformed the different peoples of England into one cohesive nation of people who we now call the English

[ DID YOU KNOW – England has 3 widely recognised national emblems ~ the flag of St. George (a red cross on a white background), the 3 lions and the red rose. The St George cross _ was probably introduced  by Richard I at the time of the 3rd crusade (1189-1192). The 3 lions _ were also introduced by Richard I who ruled 3 domains ~ kingdom of England, Duchy of Normandy and Duchy of Aquitaine ~ each lion representing one of the 3 domains ~ Richard was also known as Richard the lion-hearted or lion heart. He reigned from 1189 to 1199. The red rose _ became a national emblem following the (30 year long) War of the Roses which ended with a victory  for the House of Lancaster on 22 August 1485 ] 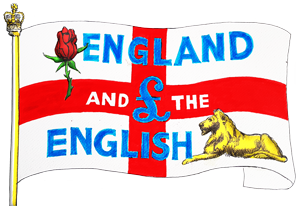 It could be argued that from 937 England remained an independent country through the governance of the sovereign power of its Kings and Queens until the death of Queen Elizabeth I of England (24 March 1603). The reign of Queen Elizabeth I (1558-1603) has been called a golden age for England. The English language flowered in the time of William Shakespeare: the English navy became the most powerful naval force in the world and English explorers roamed the world, seeking new lands and fresh opportunities. England was blessed with unforeseen riches and exciting ideas for the future of the English nation

King Athelstan is rainbow-linked with the Peregrine Falcon ~ native bird

The English are rainbow-linked with the Wren ~ native bird

1. Who became King of England after the death of Queen Elizabeth I in 1603?

2. In which year did England and Scotland become formally unified?

2. 1707 ~ The Acts of Union were signed in 1707 [precipitated by the hugely expensive and doomed Darien scheme]