This is a family page ~ sponsored by

The legendary stories of Merlin & King Arthur are mostly a combination of folklore and literary invention. It’s possible they were based on real people, but due to a lack of historical evidence this will continue to be debated and disputed by historians. They first appeared separately – in mediaeval Welsh poetry (Merlin as a prophet and wild man of the woods, Arthur as a leader of the Britons who fought against the invading Saxon forces during the 5th and 6th century).

Their first appearance in a story together was in Geoffrey of Monmouth’s 12th-century Historia Regum Britanniae (History of the Kings of Britain). This formed the basis for Arthurian legend. There have been many variations of the stories of Merlin and King Arthur, something like the following:

Arthur is conceived at Tintagel Castle in Cornwall after the wizard Merlin casts a spell to make Uther Pendragon (Arthur’s father) look like his enemy Gorlois, so that he can seduce his wife Igraine (Arthur’s mother). Gorlois dies in battle later that day and Uther marries the pregnant Igraine.

Merlin who lives in a cave below Tintagel Castle becomes a tutor to the boy, keeping an eye on him as he grows. On the death of Uther Pendragon Merlin sets Uther’s sword in a stone, saying that only the true king can remove it. Many Knights attempt to release the sword to no avail, then the 15 year old Arthur guided by Merlin comes along and easily draws the sword from the stone and is proclaimed King of Britain.

King Arthur becomes a mighty man; a great warrior and leader of men, fighting many battles. In one battle he single-handedly slays 960 enemy soldiers. He creates a huge empire through conquests of Ireland, Iceland, the Orkney Islands, Norway, Denmark and Gaul. He makes Camelot his court and he founds the Knights of the Round Table there with Sir Lancelot its greatest Knight. 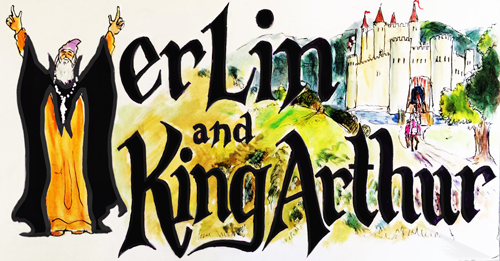 During one battle (against a giant) Arthur breaks his sword. Merlin later leads Arthur to a lake where the Lady of the Lake presents Arthur with the sword Excalibur and its magical scabbard (the scabbard protects the wearer from mortal wounds). The first time Arthur draws Excalibur in battle the light from its blade blinds the enemy and hastens their defeat.

Years of peace follow and during this time Arthur’s wife Guinevere falls in love with Lancelot. Arthur finds out and banishes Lancelot from his kingdom, Guinevere is sent to a nunnery.

Arthur’s half sister Morgana le Fay (a sorceress, who was once apprentice to and lover of Merlin) and her son Mordred (who she believes should be king) plot against him, Morgana steals his scabbard and throws it in a lake never to be seen again. The Battle of Camlann soon follows, Mordred is killed by Arthur. Arthur is mortally wounded in the fight.

Arthur orders Sir Bedivere to return Excalibur to the enchanted lake, and after two failed attempts (he found it difficult to let such a great sword go) he finally throws the sword and a hand of the Lady of the Lake emerges from the lake to catch it.

Arthur is taken to the Isle of Avalon to have his wounds tended and is never seen again.

Merlin is later trapped in a cave by Morgana le Fay who casts a spell entombing him forever.

[ In another version of the legend Merlin is trapped within an oak tree – ref. Merlin’s Oak is a famous oak tree that once stood on the corner of Oak Lane and Priory Street in Carmarthen, South Wales ]

Are Merlin & King Arthur based on real characters in history? – some historians believe that the Arthur

character is based upon a real king of the ancient kingdom of Dumnonia (founded in the present day traditional English counties of Cornwall and Devon). Recent excavations at the site of Tintagel Castle indicate that a very important individual, a possible king, lived there around the time that Arthur would have lived (according to legend). Some Arthurian scholars believe that Merlin (the wizard and advisor to Arthur) was based upon an unknown but real person who was trained within a secret order of Druids

King Arthur is rainbow-linked with the Kestrel

Merlin (the wizard) is rainbow-linked with the Merlin