This is a family page ~ sponsored by

Saint George is the patron saint of England and has been so since the 12th century. England celebrates the life and death of Saint George on April 23rd each year (ref. Saint George’s day)

According to legend, Saint George was a Roman soldier of Greek origin and officer in the Guard of Roman emperor Diocletian. It is believed that Saint George was sentenced to death for failing to recant his Christian faith. It is thought Saint George was born somewhere between 256–285 and died on 23 April 303.

[ DID YOU KNOW? It may be surprising to learn that St George was not the first patron saint of England. That honour was originally held by St Edmund or Edmund the Martyr, “King” of East Anglia in the 9th century ]

The legend of Saint George and the dragon arrived in England sometime in the 12th century, most likely related by returning crusaders from the holy land. The legend apparently originated in a place presently referred to as Libya. Over time there have been many variations of the story, something like the following:

The countryside around a city was being poisoned by a venomous dragon dwelling in a nearby lake. In order to protect the city from being affected the people at first offered the dragon two sheep daily, when this proved inadequate it became a sheep and a man, with the dragon still not satisfied they finally offered their teenagers and children.

One day in the lottery to pick the youngster to be sacrificed the king’s daughter was chosen.

When the distraught king’s offer of all the gold and silver in his kingdom for a replacement was refused, the princess was dressed as a bride and sent to the lake as that days sacrifice to the dragon.

As the princess waited by the lake, Saint George who was by chance passing, asked if she was in need of help. The princess explained the situation and that it was her duty for the sake of the people, he told her he would stay and she was trying to send him away when the dragon emerged from the lake.

Saint George who was on horseback made the Sign of the Cross and charged the dragon with his lance and seriously wounded it. He then asked the princess to throw him her girdle, and he placed it around the now tame dragon’s neck where it acted as a leash. 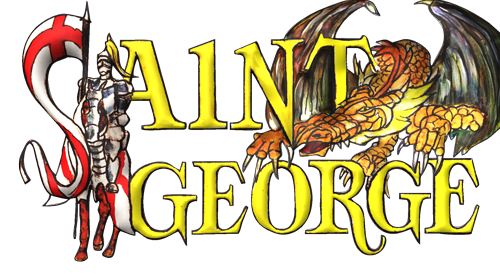 The princess led Saint George and the dragon to the city and its terrified population, Saint George offered to kill the dragon if they consented to becoming Christians and being baptised. Fifteen thousand agreed including the king and converted to Christianity. George then killed the dragon by beheading it with his sword.

In honour of the event the king built a church to the Blessed Virgin Mary and Saint George on the site where the dragon was slain and a spring flowed from its altar with water that cured all disease.

[ Did you know? Saint George is a highly celebrated saint in both the Western and Eastern Christian churches. He is the patron saint of many countries: Georgia, Armenia, Belgium, Brazil, Bulgaria, Canada, Egypt, England, Ethiopia, Germany, Greece, India, Italy, Lebanon, Lithuania, Malta, Montenegro, Palestine, Portugal, Russia, Serbia, Spain (sometimes referred to as Aragon), Syria and United States of America…………………………………………………          The country of Georgia takes its name from Saint George ]

Saint George is rainbow-linked with the Dragon (FL&M), a mythical creature of many cultures

2.What connects the Irish sea with the Celtic sea?

2. A stretch of sea water in the North Atlantic Ocean is also named after Saint George. St George’s Channel is a sea channel connecting the Irish Sea to the north and the Celtic Sea to the southwest